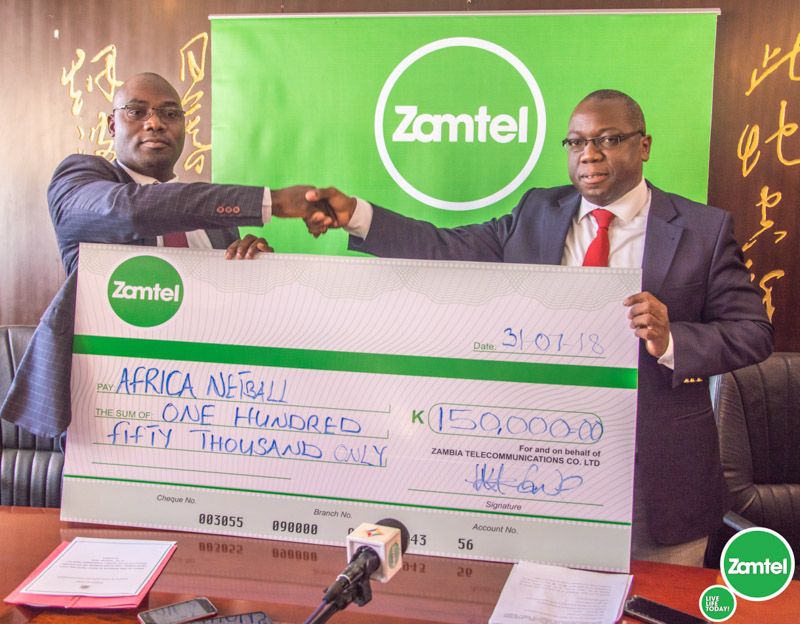 Zamtel on August 1st 2018 unveiled another sponsorship package towards sports development in Zambia.

Zamtel Chief Marketing Officer Chibeza Ngoma handed over a One Hundred and Fifty Thousand Kwacha (K150, 000) cheque to Youth, Sport and Child Development Minister Hon. Moses Mawere, M.P towards the hosting of the Netball African Championships to be held in Lusaka.

Mr. Ngoma reaffirmed the company's commitment to developing all sports disciplines in Zambia including those considered as minor.

Zamtel had also injected K100, 000 into the Choova Cycling Competition in Chipata which was held early July.

Mr. Ngoma said hosting the Netball Africa Cup will improve the standards of netball in the country.

He said Zamtel would continue to find ways of always adhering to its social corporate responsibility programmes especially through sports.

"We have partnered with a number of associations in the country which include Football Association of Zambia, Swimming Association of Zambia and most recent the just ended Choova cycling competition that was held in Eastern province, Chipata. There are other sporting activities that we sponsor every now and then and I can gladly say that we have not regretted any of it," Mr. Ngoma said.

Mr Ngoma also underscored the importance of investing in youths involved in sports. He added, "As an indigenous Zambian business, Zamtel will remain committed to supporting causes that seek to improve the lives of Zambians especially the girl child."

On his part, Hon. Mawere commended Zamtel for its continued partnership with government and the Ministry of Youth, Sport and Child Development in particular in the development of sports.

Hon. Mawere urged Zambians to support Zamtel in order for the company to continue investing in sports development in Zambia.

He said government is ensuring that all sports disciplines are supported equally.

Zambia hosts the Netball African Championships from 13 to 18 August 2018 at the OYDC in Lusaka.